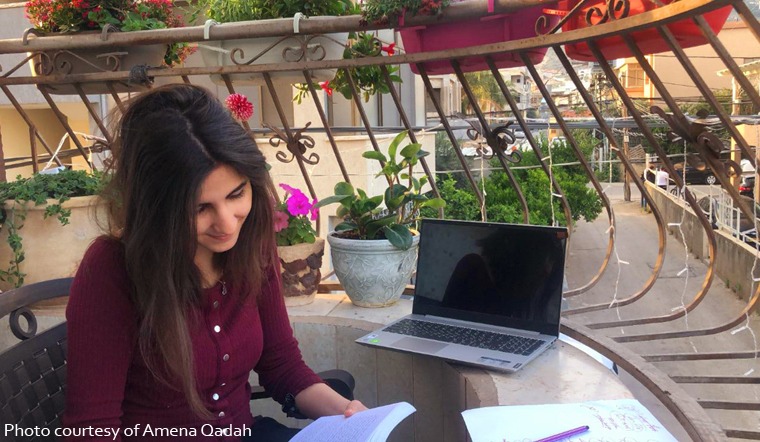 Amena Qadah is a first-year student majoring in Chemistry and Biology. She grew up in Majd al-Krum a village in northern Israel. Three years ago, along with her friends, she developed the Majdalawi Youth Association for Change. They raised money to help people in their village – with astounding success. They organized community lectures on different topics (science, education, art, literature); helped needy families during Ramadan; organized special days for high school students; delivered holiday gifts to the elderly; and more.

"I’ve always believed in Mahatma Ghandi’s saying, and it drove me to be part of the Youth Association: 'Be the change that you want to see in the world'."

Amena is the second of five siblings. Only her mother is able to work, and she knew her parents could not support her financially. Thus, after graduating Amena began working as a service representative for a communications company to save money.

After working for two years, Amena began to suffer from extreme depression. She quit her job and had all but given up on life. She found herself entirely alone; mental illness was stigmatized by her community. People around Amena blamed her for her condition, called her weak, and said she wouldn’t be able to attend university.

"One of the hardest things in life is not being able to go after your goals because of circumstances you cannot determine."

Amena recovered on her own, with very little community support. Thanks to psychological care, she was able to return to work and register for the Hebrew University. School is very demanding, and she was unable to balance her studies with work. Thankfully, she received a scholarship that enables her to focus entirely on her studies.

She chose to study Biology and Chemistry after reading an article about Alzheimer’s Disease, and the lack of a cure. She began reading more and more about neurodegenerative diseases. At the same time, Chemistry lured her with its potential to develop medications for mental illness.

"I like sitting in the University libraries and enjoy the pleasant environment on campus. I feel happy and satisfied sitting on campus, studying together for tests, or just hanging out on the lawn."

After moving to Jerusalem, Amena couldn’t remain involved in the Youth Association, but today over 60 volunteers continue what she helped start. Amena sees her studies as a direct continuation of her community involvement: “Knowledge and humanism are parallel values; we must believe in ourselves, in the power of humanity.”