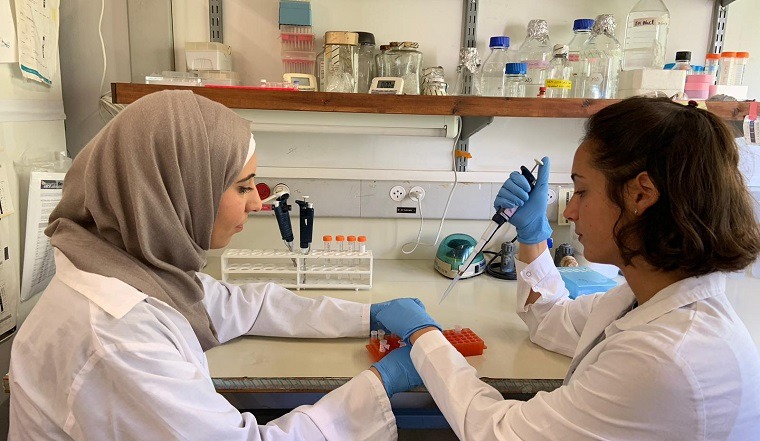 Aya Awad grew up in East Jerusalem. She studied at Birzeit University, earning a BSc in biology along with a teaching certificate. She taught science to high school students from both East and West Jerusalem in various capacities, including the Hebrew University Youth Division. Aya aspired to an advanced degree but was worried about not fitting in at the Hebrew University, as she speaks no Hebrew and wears a hijab. Instead, she enrolled in Bethlehem University’s biotechnology master’s program, studying novel mutations that cause a rare genetic disease and working with affected families in Hebron. But when she wanted to bolster her laboratory skills, Aya knew she’d have to leave her comfort zone. She began working at the Hebrew University, in Prof. Dudy Tzfati’s lab – and never left. Five years later, she’s about a year away from completing her doctoral dissertation under his supervision.

Noa Hourvitz grew up in central Israel. She’d always been interested in genetics and earned a BSc in biology at the Hebrew University. During her undergraduate studies decided to join Prof. Tzfati’s biology lab. After graduating, Noa began a master’s in genetic counseling, which she combines with research in the lab.

When Noa joined Prof. Tzfati’s lab, most of its members were international, advanced degree students. As the sole undergraduate, she felt intimidated. And Aya, like many residents of East Jerusalem, hadn’t had the best of experiences with Israelis. Yet Aya reached out to Noa, and they instantly became friends, both inside and outside of the lab. Both women realized how precious their friendship was, both on the local and national levels, and decided to apply to STEP, a US-based program that pairs and supports Israeli and Palestinian graduate students who work and/or conduct laboratory research together.

"As scientists we are obligated to pay attention to details, open our minds to new ideas, and avoid prejudices. Therefore, we also should never judge people who, at first sight, seems different from us. The STEP scholarship has allowed us to be part of something pure, bringing together people from different backgrounds, religions, and genders, but who share similar interests and work. At the end of the day, we are all alike."

Back in the lab, Aya and Noa are nearly inseparable. They recently published their first scientific paper and are working on another. They study telomeres, which are little “caps” at the ends of our chromosomes that maintain their stability and function. Telomeres gradually shorten with age. This can eventually lead to a variety of diseases, ranging from aging-associated pathologies such as diabetes and heart diseases to a heightened risk for cancer. In extreme cases, accelerated telomere shortening can cause a fatal genetic disease called Hoyeraal-Hreidarsson syndrome (HHS), which is the subject of Aya and Noa’s research.

In their joint paper, together with other students and collaborators, they showed that mutations in a gene called RTEL1 cause HHS by preventing telomerase (a ribonucleoprotein) from doing its job, which is to elongate the telomeres to maintain their function. While each woman studies a different mutation of the gene, they complement each other, and their combined research contributes to a better understanding of telomere biology in health and disease. In the future, they hope that it will lead to the development of a therapy that will save the lives of children affected with this fatal disease.

"Science is the best way to remove boundaries between people from different backgrounds. STEP has given us a great opportunity – which we must seize, if we are to accomplish our goals, while also empowering more women to enter science."