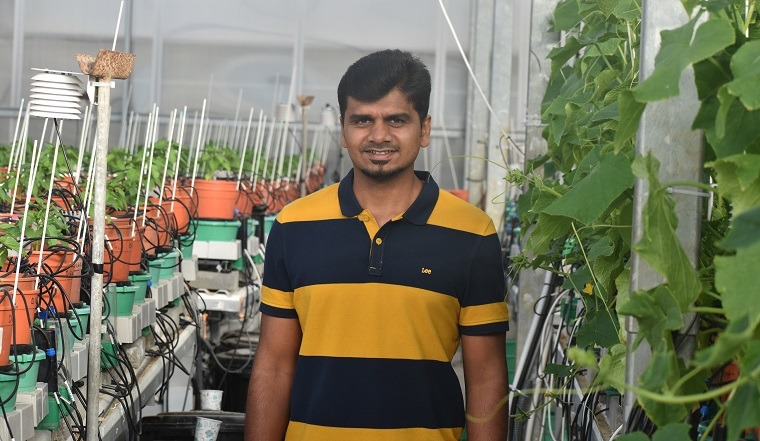 Ravitejas Patil hails from Bangalore, India, which is considered that country’s Silicon Valley. When deciding what to study, he decided against the mechanical and engineering fields, which he had encountered through his father’s work as an engineer. Instead, Ravitejas turned to the natural sciences, earning a bachelor’s degree from the University of Agricultural Sciences, Dharwad.

In considering his next step, Ravitejas wanted to study abroad in order to broaden his horizons as much as possible. A friend living in Israel recommended the International School of Agricultural Sciences in the Robert H. Smith Faculty of Agriculture, Food and Environment.

"Israel is a great place to study. The country was built and developed by such a small population, there’s nowhere like it in terms of technology and innovations."

Today, Ravitejas is working towards his MSc in Plant Science, studying how plants react to stress, namely drought conditions. His work is comparative; he studies differences between tomato varieties, including the commercially available tomato, a wild, desert variety, and lines bred by Prof. Dani Zamir.

In particular, Ravitejas studies the plants’ phenotype, meaning their external characteristics. To this end, he uses the high-throughput physiological phenotyping system (patented by his advisor, Prof. Menachem Moshelion, and Prof. Rony Wallach) to carry out his experiments in the greenhouse, while also manually measuring traits such as a leaf’s water potential and osmotic potential. In this way, Ravitejas can understand how much water plants can hold and retain, as part of their response to drought.

Looking forward, Ravitejas would like to earn a PhD and return to India to put his knowledge to use. Many Indian farmers still employ traditional methods, due to an assortment of barriers to mechanization.

"I want to help famers in India maximize their yield. This means developing and implementing ways to get the best possible crop at the lowest possible cost."

When the country went into lock-down mode, only students who were living on campus were able to access the labs and greenhouses. Ravitejas was one of two members of his lab living in campus. As a result, he was kept busy from morning till night, tending to and advancing his colleagues research – in addition to his own research, which had been scheduled to begin in March. Thanks to his immense efforts, his lab-mates were able to pick up their research and continue – as if nothing happened.