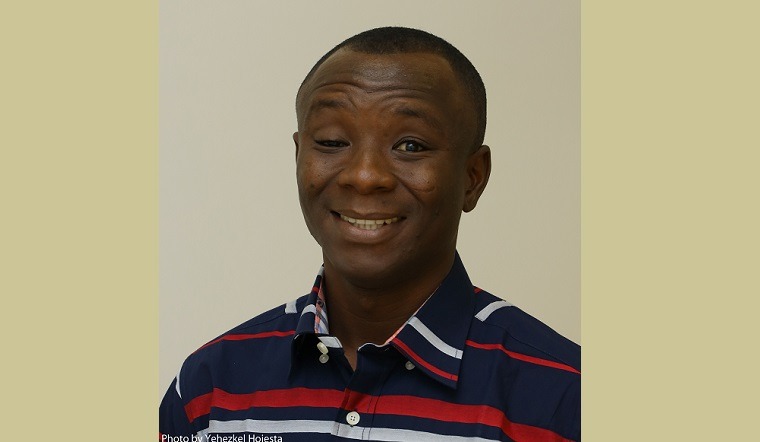 Joseph Addae was born and raised in northern Ghana. Both his parents were medical professionals; his mother was a midwife and his father a medical assistant. As a result, Joseph and his family would move every few years, as the government transferred his father between posts.

"As I moved around, I was impressed by the international NGOs and their commitment to improving the lives of rural people, whether through nutrition, sanitation, construction, medical services, or other humanitarian relief. This inspired me to earn a degree in Development Studies."

After completing his bachelor’s degree and national service, Joseph received a scholarship that enabled him to study at Brandeis University, where he earned an MA in Sustainable International Development. It was during this time that Joseph became interested in health, as he realized that nearly every aspect of our lives affects our health – for better or for worse.

Upon returning to Ghana in 2013, Joseph was hired by King’s Village Ghana (KVG) as a Program Manager in charge of water, sanitation, and public health and was eventually promoted to Central Administrator of the organization and a Health Planner at the affiliated King’s Medical Center. His responsibilities include planning, coordinating, and executing interventions aimed at improving care.

KVG is a faith-based, evangelical community organization that operates a primary and middle school, a hospital, and community development services. Joseph’s job is multifaceted, and he works on numerous programs and projects at once.

One example of Joseph’s work was saving young children who were suffering from malnutrition. The prominent cultural belief in the northern region was that malnourished children were an indication that an evil spirit was present. As a result, mothers were expected to abandon their children deep in the forest and return to the village without ever looking back – otherwise the evil spirit would persist in their household.

In response, in 2008 KVG established a Nutrition Rehabilitation Centre. As part of his job, Joseph supervised the team that would enter communities and make contact with the elders, aimed at both changing beliefs and providing services. Now, mothers have an alternative – they bring their child (often surreptitiously!) to the Centre, where the child is nursed back to health and the mother given knowledge and tools to better nourish her offspring. Since its founding, the program has saved the lives of over 4,300 severely and moderately malnourished children. Joseph was also influential in advocating for the establishment of a mental health unit in the hospital and the establishment and operation of a high-dependency unit for malnourished children in the district.

These projects led Joseph to study in the International Master of Public Health program (IMPH), where he is focusing on public health and nutritional data. Upon graduating, he will return to his job in Ghana – ready to make an even stronger impact on people’s health.

"The knowledge and exposure I’ve received in Jerusalem will make me a better leader of my organization, and I will be more equipped to impact society. Learning to understand the cultural dynamics in Israel has taught me to be a better Christian and a good citizen of the world."

In the long term, Joseph plans to pursue further research into ways to strengthen health care systems, in order to help direct his country and the west African sub-region towards better health care for all.