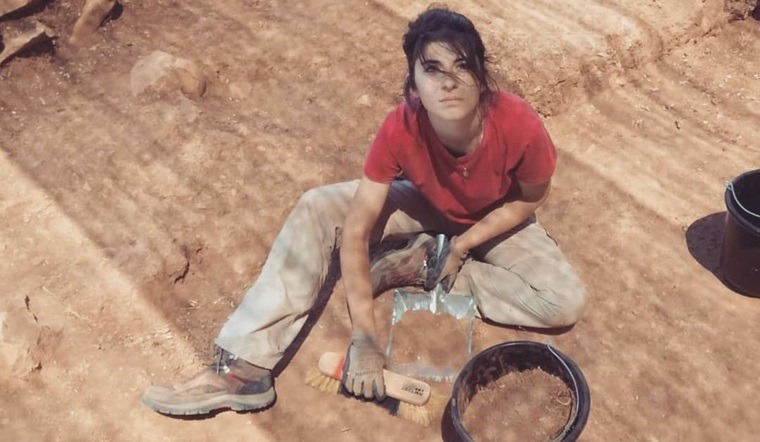 Lea B is a second-year student studying art history and archaeology. She was born in France and made aliya with her family as a young child. Neither of her parents was educated, and they never fully acclimated to life in Israel. Over the years, debts grew increasingly large. First her father left Israel, then her mother left home in search of employment, cutting off contact. Her older sisters married and moved out. By the time she was in high school, Lea was left to fend for herself and one sister – all while trying to settle their parents’ debts.

Lea was unable to complete her matriculation exams. After high school, she was taken under the wing of her art teacher; she collected donations to enabled Lea to complete a few exams before enlisting. Towards the end of her service, while participating in a course for lone soldiers, Lea learned that she could attend a preparatory program and finally graduate high school. She decided upon the Hebrew University preparatory program run by the Dean of Students Office. A year and a half later, she had earned her matriculation certificate.

"I was so excited to study at such a prestigious institution, even if I was only completing the matriculation exams. The fact that I was spending time on campus and studying – even if the program wasn’t necessarily academic – inspired me to succeed and continue to a Bachelor’s degree."

As a teen, Lea had studied art history but her relationship to the subject had been fraught. Also, Lea had always been drawn to archaeology and felt the lure of old, historic buildings. In France she’d admired the monasteries and cathedrals, and later the buildings and walls of Jerusalem’s Old City.

She considered returning to France to study the conservation of historical buildings but decided to remain in Israel after the preparatory program staff guided her through her options. Lea realized that she could apply to the Hebrew University thanks to her improved matriculation certificate and earn a degree from the Hebrew University.

Thanks to generous donors, Lea is able to focus on her studies. She feels lucky to be studying two subjects that she loves. Meanwhile, she’s excited about opportunities to gain experience in restoration and conservation, even before completing her degree. Eventually, she hopes to get a Master’s in the field.