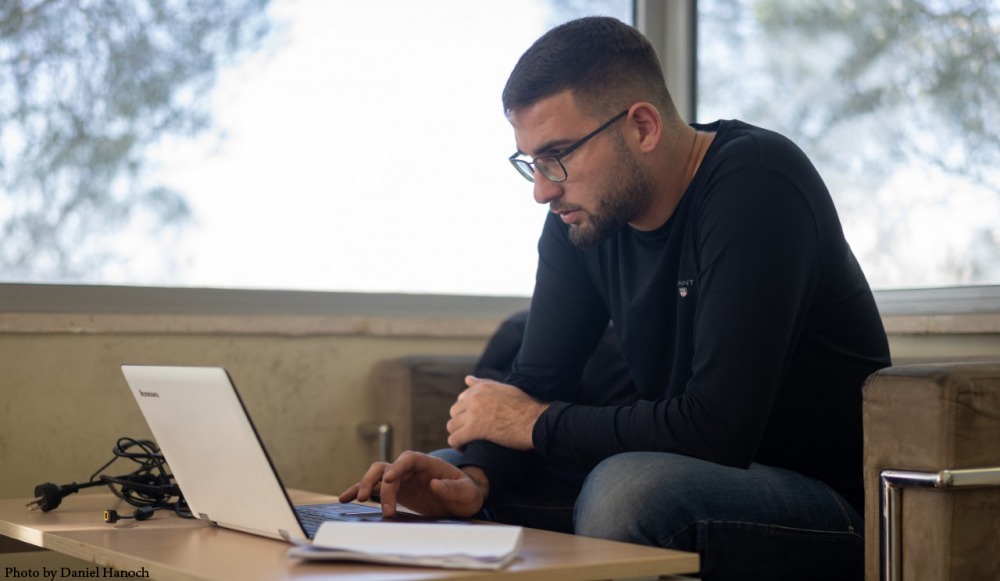 Yedidia Ashur grew up in an ultra-Orthodox community in Jerusalem. In his mid-teens be began straying from the religious lifestyle, eventually leaving home. He lived on the streets or with friends, worked whatever jobs he could find, and often got by on strangers’ kindness.

In the spring of 2018, when he was 22 years old, Yedidia received a phone call out of the blue. A stranger was on the other side of the line, inviting him to his home for the Passover Seder. This man, an accomplished academic and engineer, had received the number from a friend who had hired Yedidia for an odd job. During the Seder, Yedidia shared his life story. Immediately after the holiday, the man called Yedidia again, drove to pick him up, and took him to the Hebrew University. He helped with the bureaucracy and paperwork – and Yedidia was enrolled in the Joseph Saltiel University Preparatory Center’s program.

"I felt that I’d met Elijah the Prophet."

The last time Yedidia was in school, he’d been a 14-year-old yeshiva student. Now, he worked harder than he’d ever worked before, studying up to 18 hours a day. Besides attending classes, Yedidia received extensive support from a slew of tutors. He met regularly with an English teacher who gave him private lessons and helped with his homework. During the fall semester he, along with a few other students, met with a math tutor. After getting the hang of it, he left the group and received private math tutoring from an economics student. As he was studying in the Social Sciences track, graduation required writing an original research paper. Yedidia wrote about the influence of globalization on soccer violence, supported by a private tutor with whom he met throughout the process.

In addition, the engineer continued to offer help, academic and otherwise. Yedidia was driven – with his eye set on law school. As a youngster living on the street, he’d been taken advantage of by employers, cellphone companies, banks – because he hadn’t known his rights.

"They say that knowledge is power, and this holds even more true for knowledge of the law. I was taken advantage of because I didn’t know my rights. I want to help others who are in my situation – helping them avoid predatory pitfalls."

Mid-year, Yedidia received a generous grant from a donor, enabling him to work less and study more. He eventually graduated from the Saltiel Preparatory Program and was accepted to the Hebrew University’s Faculty of Law. He began his studies this fall, backed by a generous scholarship that covers his tuition and living expenses. He hopes to double major in education, in order to gain additional tools for working with at-risk youth.

Reflecting back on the last few years, Yedidia recalls how higher education wasn’t even on his street-dwelling friends’ radar. They thought he was weird; today, another friend is studying to be a structural engineer, and others are considering following in their footsteps. As for his personal Elijah, he admits that he’s never done such a thing and will likely never do it again. He and Yedidia remain in close contact.