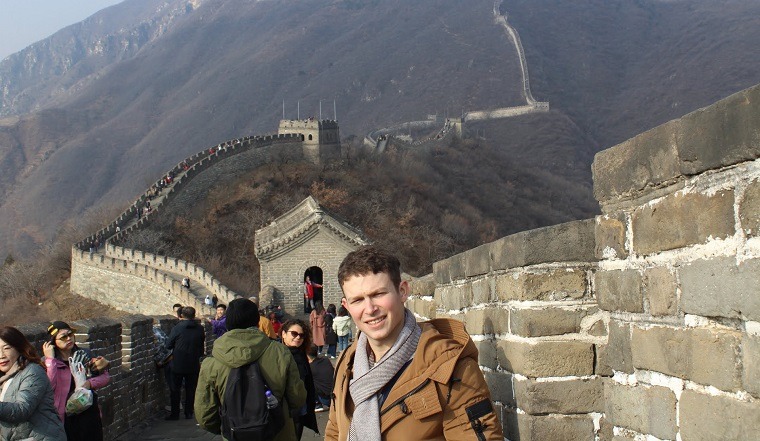 Eitan Waxman was born in the United States and made aliya with his family as a child. During his military service he held a number of leadership positions, helping him realize his potential as a leader. In addition, he’d long been interested in Asia and wanted to incorporate the region into his studies.

Eitan decided upon the Hebrew University, which offers a double major in business administration and east Asian studies. He thought that the business world would be a good place to apply his leadership skills. Furthermore, he was lured by the University’s exchange agreements with many Asian universities, which would enable him to study abroad.

Although most students spend only a semester abroad, Eitan was determined to spend an entire year at Tsinghua University, one of China’s top research institutions. He had entered the Hebrew University speaking some Chinese and had taken additional language classes. Yet Eitan knew the only way to truly grow was to immerse himself in the culture and language.

After landing, Eitan didn’t waste a second. He rented an off-campus studio apartment, tasted everything, and began taking classes with both international and Chinese students. As the semester progressed, he made friends, met and visited locals at their homes, joined a tea club, participated in a Chinese language competition, and even joined the University orienteering club – traveling with the club to compete in different cities.

In his efforts to fit in, Eitan adopted a Chinese name: Wén Yì Tán (文毅潭). Wén means culture and echoes his last name – Waxman. Yì Tán, besides being a homophone for Eitan, means will power (Yì) and a deep body of water (Tán).

"I was thankful on a daily basis for having learned Chinese. Whether taking a class with Chinese students or participating in team sports, speaking Chinese put me on the inside, I was one of them."

One memorable academic experience was a class on e-commerce, taught by a Chinese professor. Although the course was introductory, it provided an in-depth view into the local market and culture, where cash is rapidly becoming obsolete – an experience simply unavailable elsewhere.

Unfortunately, the Coronavirus broke out between semesters. After hearing that Tsinghua University would transfer all its classes online, Eitan decided to return home to Israel. As things turned out, Israeli universities soon followed suit – and Eitan had a virtual spring semester nonetheless.

"I gained so much from studying abroad. Although I speak English and Chinese, I’ve never had to study academically in either language. Being immersed in a different culture, seeing how people from different backgrounds relate to each other, and even experiencing life on a very different campus – all challenged me as a student and enriched me as a person. This was the experience of a lifetime."