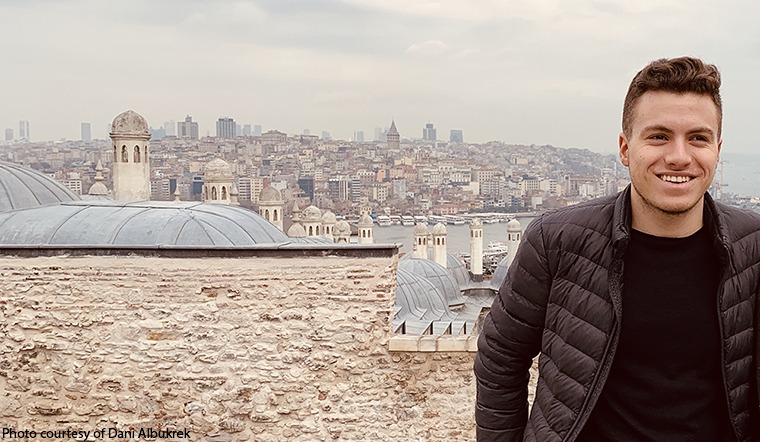 Dani Albukrek is a second-year student of Political Science and Middle Eastern Studies. Growing up, his family belonged to Istanbul’s small Jewish community. His family highly valued education, and Dani developed his own thirst for learning. He attended a prestigious private elementary school in Istanbul, outside of the Jewish community.

"Studying in a mixed school with children from all different backgrounds, provided me with the ability to see the treasure behind diversity."

Entering high school, Dani knew he wanted to study history and politics, to gain a deeper insight into the dynamics and cultures of the Middle East. He enrolled in the private Ulus Jewish School, where classes were held in English he could begin learning Hebrew. He was looking forward to encountering the peoples and cultures of the Middle East on their terms – and in their own language.

Although high school was challenging and rewarding, Dani missed the diversity of his elementary school. Graduating with honors and having served as co-president of the student council, Dani was determined to pursue a higher education abroad. He considered his options and settled on the Hebrew University of Jerusalem – a diverse institution within a multicultural city. He studied at the Rothberg preparatory program for new immigrants, opting for the business/economics track. Now, in addition to bolstering his Hebrew, he has also begun studying Arabic.

"My most memorable experiences at the Hebrew University are the long conversations to understand each other's perspectives, thoughts, and emotions about the region and its complexities. This is the far most precious thing I gained in Jerusalem, and I will never forget what I learned here.