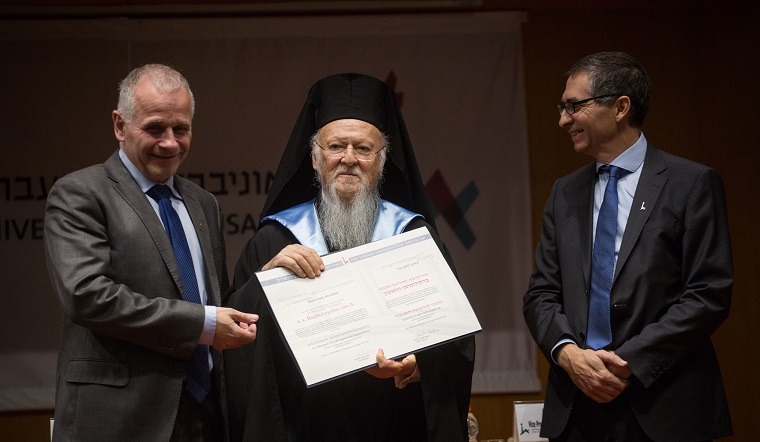 On December 6, 2017 His All Holiness Bartholomew I, Ecumenical Patriarch of Constantinople received an Honorary Doctorate from The Hebrew University of Jerusalem.

The event was attended by a wide array of religious leaders, ambassadors and dignitaries. The presentation of the honorary degree was followed by an address from His All Holiness:

His All Holiness the Ecumenical Patriarch Bartholomew I of Constantinople, popularly known as the "Green Pope," was appointed as the primary spiritual leader of the world's approximately 300 million  Orthodox  Christians on November 2nd, 1991. Since then he has pursued a constant vision of spiritual revival; of Orthodox unity and Christian reconciliation; interfaith understanding and coexistence; and environmental awareness and protection, making every effort to mobilize the world's moral and spiritual forces for the sake of harmony among all human beings and between humankind and nature.

Under his auspices, the Ecumenical Patriarchate has advanced interreligious dialogue with the Muslim world and with the worldwide Jewish community. He has also initiated and co-sponsored international peace conferences and symposia  dealing  with  issues  such  as  racism  and  fundamentalism  and  has  endeavored to generate cooperation and increase mutual tolerance and respect among Catholic, Muslim, Jewish and Orthodox Christian communities, particularly in the Middle East and the Mediterranean.

No less important, the "Green Patriarch" Bartholomew I is a distinguished environmentalist, avidly involved in urgent ecological issues such as the pollution of the world's waterways. His reputation for raising global environmental awareness has earned him the Sophie Prize, the U.S. Congressional Gold Medal, and numerous other awards. His efforts to promote religious freedom and human rights, his initiatives to advance religious tolerance among the world's religions, together with his work toward international conflict resolution and environmental protection, have justly placed the Ecumenical Patriarch Bartholomew I at the forefront of global visionaries, peacemakers and bridge-builders.