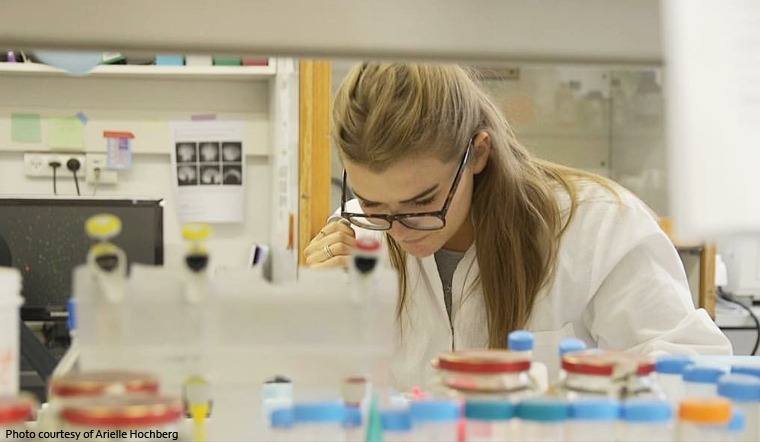 Arielle Hochberg was born in New Zealand and grew up in Australia. Her family maintained strong ties to Israel. During her undergraduate studies at the University of Sydney, Arielle received a scholarship that enabled her to spend a semester at the Rothberg International School at the Hebrew University. It was there she discovered the research internship program and met Prof. Tal Burstyn-Cohen. As a student of neuroscience, Arielle was welcomed into Prof. Burstyn-Cohen’s lab, studying the development of immune cells in the brain. At the end of the semester, Prof. Burstyn-Cohen invited Arielle to return after completing her BSc.

In 2018  Arielle began studying in the Hebrew University’s International Graduate Bio-Medical Sciences Program. She has been investigating the role of Protein S in microglia (immune cells of the brain) following traumatic brain injury. While conducting her research, she has taken full advantage of the university’s resources and facilities, as well as collaborated with other labs.

"I achieved much more than I thought possible. My understanding of science and research techniques has expanded substantially and I have developed the ability to work independently and in groups, design experiments, generate ideas, teach others and most of all I feel like I am making a contribution to the scientific world."

One of Arielle’s favorite aspects of the lab are the weekly meetings. These are an open forum to share findings, suggest ideas, and brainstorm together. Arielle feels these meetings are “a great initiative to develop critical thinking and problem solving.” In addition, she found her classes to be a refreshing break from the lab. Every week, Arielle and her fellow students broaden their knowledge in classes ranging from biofilms, chromosomes, methods of anthropometry, osteology, and more.

Arielle is proud to have presented at two conferences, one in Eilat and one in Germany.  She also mentored Israeli high school students in the Alpha program. On top of this, she has greatly enjoyed living in Israel and being part of the local culture: festivals, cuisine, and social events with her lab mates.

Looking forward, Arielle hopes to pursue another degree, either a PhD or a MD-PhD. In the meanwhile, she will return home to work on a neuroscience clinical trial.