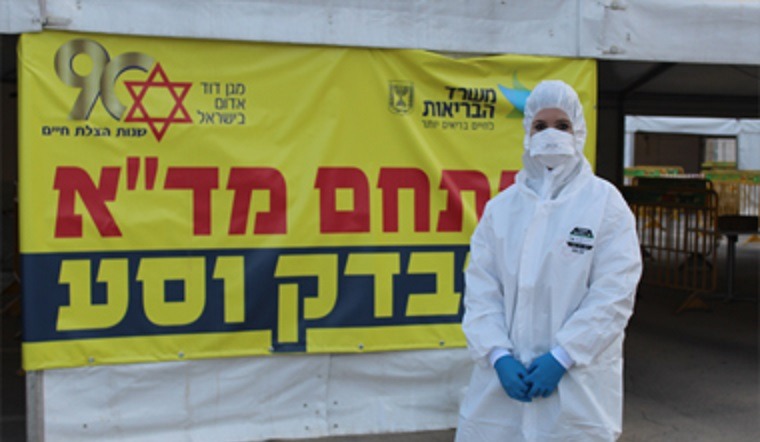 At first, nothing seemed out of the ordinary. The MDA ambulance pulled up and parked outside a building in one of Jerusalem’s ultra-Orthodox neighborhoods. A woman stepped out and began preparing. She pulled on gloves and stepped into a PPE overall. She put on a facemask, donned the overall’s hood and zipped it up, covering most of her face. She put a protective shield over her entire face and grabbed a Coronavirus test kit.

She headed into the building – headed home.

The volunteer was Eliana, a first-year student in the Bio-Medical Sciences program. The person she was going to test was her brother.

Growing up in this ultra-Orthodox neighborhood, all higher education was considered taboo. In high school Eliana completed the Szold Examinations and earned a teaching certificate. Both were awarded on a pass/fail basis, meaning that Luly never learned to take notes, review material, or study for exams. In fact, she almost never had notebooks and routinely skipped class. Deadlines were unheard of and she’d never been exposed to any core curriculum. Yet she graduated with straight As and dreamt of becoming a doctor.

She moved by herself to New York and, after two years abroad, reached a brave decision: She’d enroll in the Hebrew University. Luckily, a few years ago the Szold Examinations were determined sufficient for applying to higher education – availing Eliana of the need to attend a preparatory program. Thanks to her time in the US, her English was quite good. Nevertheless, she was clueless where to start; she’d never heard of the psychometric exam, had minimal study skills, and hadn’t a clue what the university was actually like.

After a month of studying online, Eliana took the psychometric exam and scored highly. She could apply to nearly any program she wanted, and chose to study Bio-Medical Sciences.

"After completing my first semester with a grade average of nearly 96 – I finally knew I’d made the right decision. I know I can do it, and I’m invested in succeeding in this program."

Eliana’s family has had mixed reactions. Some are ashamed, while others are glad that she returned from the USA. A few had tried to dissuade her, yet she countered with the approval of a rabbi with whom she’d consulted. Slowly, her family has come to accept her, and even enjoy hearing stories from school.

When the Coronavirus pandemic struck, Eliana began volunteering at a drive-through test site. At that time, one of her brothers had been sent home from yeshiva to be in quarantine. But he wasn’t sufficiently symptomatic to qualify for a test and was later told that quarantine was unnecessary. Yet Eliana was concerned: he was sharing a tiny apartment with nine other people, including their 80-year-old grandmother. She spoke with the drive-through director and received authorization to test her brother. Her concerns were valid – her brother’s test came back positive.

"I was proud to test my brother for Coronavirus. Suddenly, my family saw the importance of my studies and the reason I want to join the medical profession."

During the regular school year, Eliana receives academic tutoring through the Dean of Students Office. Advanced bio-medical science students help her with basic material, as well as provide an invaluable source of motivation.

"Ultra-Orthodox students are not supported by their surroundings, nobody is encouraging them to excel. They lack role models, and never hear stories that begin “when I was a student…”

Eliana sees herself as an ambassador, liaising between the University and her community. She openly discusses her financial aid, which does not cover all her expenses (many ultra-Orthodox believe the state covers everything, in order to lure youngsters away from religion). She is also happy to advise on the myriad ways the university has helped her succeed.

Looking forward, Eliana still dreams of being a doctor. But for now, she is gaining academic experience and can decide later whether to transfer to medical school or pursue a career in research.