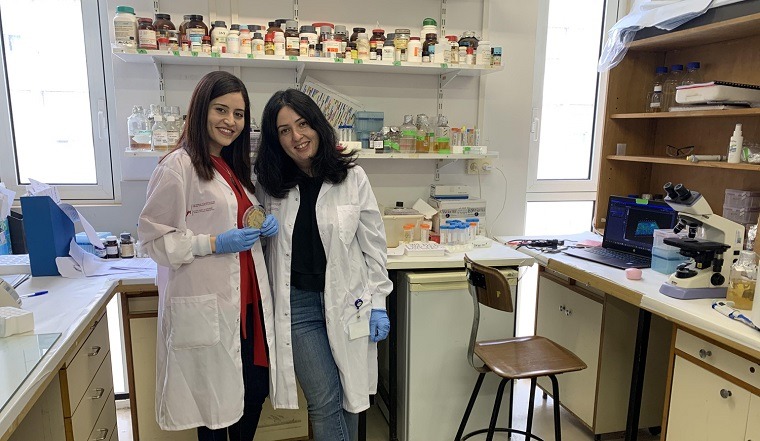 Sarah Gingichashvili was born in Georgia, grew up in Jerusalem, and has spent much of the last decade and a half at the Hebrew University.  She earned a BSc in computer science before deciding to pursue a degree in dentistry. After three pre-clinical years, Sarah continued to an MSc, and then PhD, in bio-medical sciences. In 2015 she joined Prof. Doron Steinberg’s lab and began conducting biofilm research. In her spare time, she began an MSc in computer science, completed an MBA, and worked as a developer for a local health analytics start-up company.

Muna Aqawi grew up in East Jerusalem and earned a BSc in Pharmaceutical Studies from the Jordan University of Science and Technology. After graduating she returned home and worked as a pharmacist. Yet her love of science lured her back to academia. In 2017 she began the Hebrew University’s International Bio-Medical Sciences Graduate Program and joined Prof. Doron Steinberg’s laboratory, researching biofilm, with the goal of earning a PhD.

Muna and Sarah instantly became friends – within the lab and beyond. They often go together to the movies or to eat local street food. They have also presented at conferences and participated in faculty seminars together.

"We feel very fortunate to work side by side and to get to know each other through research and the beautiful city of Jerusalem."

This is Muna’s second year receiving the STEP-Sisters award. After her original partner graduated, Sarah was selected to join the program. Their project focuses on the cervix, investigating the potential anti-microbial effect of endocannabinoids (molecules that bind to cannabis-specific receptors) against cervical infections.

"Being part of a joint project has greatly benefitted both of us. Each of us brings different skills and methods to the project: Muna through her knowledge of pharmaceutical formulations and microbiology and Sarah’s ability to develop computerized tools for analyzing biological/microbiological data. By working together, we are able to provide new insights and research previously unexplored avenues."

Muna’s doctoral research, under the supervision of Prof. Steinberg and Prof. Michael Friedman, focuses on the use of cannabis-based pharmaceuticals to disrupt cell-cell communication, with the hope of reducing the virulence of bacterial biofilms.

Sarah’s doctoral research, under the supervision of Prof. Steinberg and Dr. Osnat Feuerstein, focuses on developing computerized algorithms for characterizing structural aspects of biofilms, with the goal of understanding their resilience to traditional anti-microbial treatments.

"Scientific research is defined by its collaborative and interdisciplinary nature. We believe ourselves obligated to foster those relationships by sharing our research and supporting our peers. STEP does precisely that: pairing scientists from different backgrounds leads not only to short-term scientific collaborations, but to - long-term relationships that in our case will undoubtedly last for many years ahead. We are thankful for STEP-GTP for supporting young scientists and promoting Israeli-Palestinian partnerships – in these troublesome times their support is invaluable."