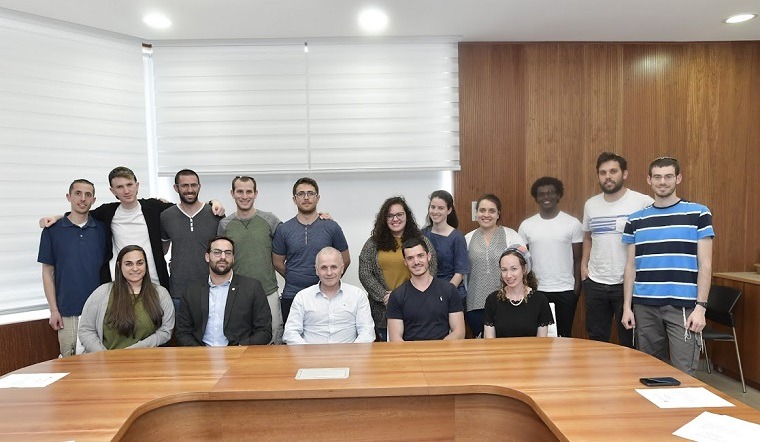 Students excelling in STEM felds who are part of the Schulich Leader Scholarship Program were celebrated this week in an event with Hebrew Univerity President Prof. Asher Cohen.

The event was kicked off by Ram Semo, Director of the Division for Advancement and External Relations who welcomed the University's elite Schulich Leaders.

Limor Shiffman, Vice Dean of the Faculty of Social Sciences and Professor in the Department of Communications at the University, then presented a fascinating talk for the Leaders on the topic of internet memes, and how internet trends can be studied scientifically to better understand evolving trends in society.

Prof. Shiffman's engaging lecture was followed by introductions by Schulich students, a talk by Prof. Cohen and Uri Karmi VP, Director of Israeli Operations for the Schulich Foundation.

“These programs are very important to us, said Prof. Cohen. “I wouldn't miss this opportunity to welcome you to the University. Schulich Leaders will greatly contribute to society. It's wonderful seeing this group of students doing amazing things, and I know you will look back on these as great years." Following Prof. Cohen's remarks the students were encouraged to engage in a lively discussion with the Hebrew University President, asking him topical questions in a round table format.

Scholarship recipients are fully funded through their undergraduate university educations, better enabling them to pursue their dreams to become the next global leaders in STEM fields: science, technology, engineering, and mathematics.

"I'm very, very lucky to be one of the Schulich Leaders," says Noa Hazoni, a second-year student studying Physics and Biology at the University. “I come from a religious family, with nine children. After serving as a combat officer in the army I married a lone solder; we have been married two years now. We are completely supporting ourselves and without the scholarship I wouldn't be able to study at the University. My life would be totally different without the scholarship."

Tzvi Michelson, a first-year student at the University studying Computer Science and Psychology, agrees. “To study without working is a huge burden lifted," he says. “And in addition to the financial benefits, he continues, it creates a platform for us through organized and informal events, meetings, and discussions, Schulich Leaders network and propel each other forward academically and professionally, hopefully for many years to come."

This program is funded by The Schulich Foundation and Co-Administered by UJA Federation of Greater Toronto. Scholarships are offered between June 15th - August 15th each year. Applications are now available for the upcoming academic year, please visit the Schulich Leader Scholarship website for more information.