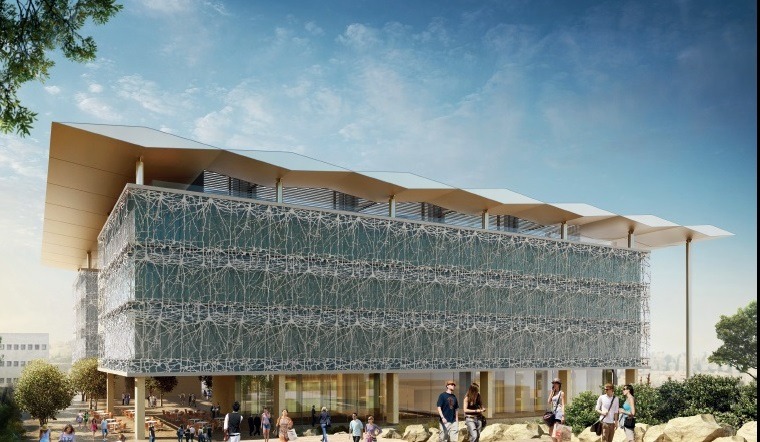 5 years of construction in less than a minute and a half: special exhibition at the Cinematheque

Based on a translation from Kol Hair Jerusalem, February 26, 2018

A special exhibition at the Jerusalem Cinematheque "Action > Potential" presents a special documentation of the construction of the new Suzanne and Charles Goodman Brain Sciences Building of the Edmond and Lily Safra Center for Brain Sciences (ELSC) at the Hebrew University. Construction of the new building on the Edmond J. Safra Campus began about five years ago and is expected to be completed this year - in a special film that is less than a minute and a half long, the construction of the building is presented. The "Action > Potential" exhibition will be held from February 25 to March 19 at the Jerusalem Cinematheque.

The exhibition is part of the Art & Brain Week of the Edmond and Lily Safra Center for Brain Sciences at the Hebrew University, in cooperation with the Jerusalem Cinematheque. Curators Michal Mor and Alona Shani-Narkiss have compiled nine posters, pairs of architectural elements from the Suzanne and Charles Goodman Brain Sciences Building, which is being built on the campus of the Hebrew University, with elements from the brain world produced by M.R.I photographs, microscopic photographs and more. The posters show the similarity between the brain and architecture, as well as the inspiration they give each other. In addition to the banners, a one-minute time lapse video documents the construction site, which follows five years of construction.

What happens when brain science researchers meet with architects to realize their vision of creating the ultimate space in which intensive research activity brings together researchers from different disciplines? The realization of this dream was made possible when scholars, architects and donors joined forces under the auspices of the Hebrew University to establish a single unique building in Israel.

The Suzanne and Charles Goodman Building for Brain Sciences, which will soon open on the Edmond J. Safra Campus, was designed by renowned architect Norman Foster and the Jerusalem office of Baer, Shifman-Nathan Architects, and incorporates formal influences that simulate and inspire the human brain. The synergy between the architect and the scientist took place on various levels. On the one hand, the architects were inspired by concepts and structures from the realm of the brain and applied it to the interior design of the building and its encasement. On the other hand, they had to design a building that would serve the unique needs of brain researchers, the campus of architectural tradition, and the city, with its many characteristics.

A central element in the vision of ELSC was to establish a building that would encourage multidisciplinary ties between researchers on a daily basis. In the encounter between the architect and the researcher, the possibility of translating the vision into physical realization was enacted. Charts, microscope photographs, imaging scans and mathematical formulas collected over the past century have become visual tools in the hands of architects and have been translated into concrete components in the modern structure.