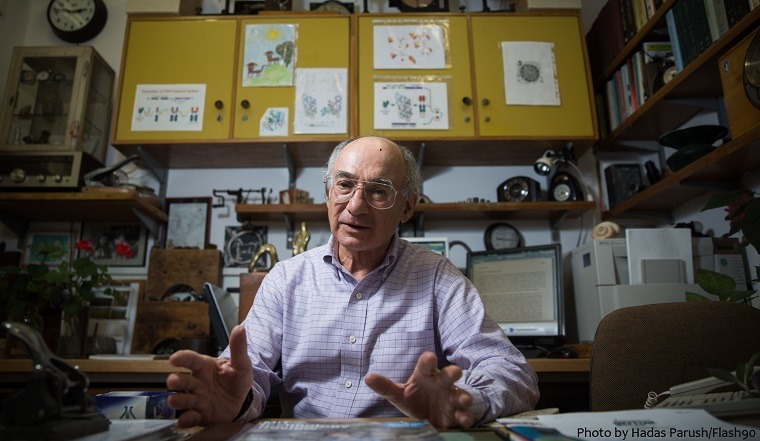 For the last three decades, Professor Raymond Kaempfer has been tackling one of medicine’s largest problems: evolving antibiotic resistance and lethality of many bacteria, including Staphylococcus aureus and Streptococcus pneumoniae.

The mechanism by which these bacteria kill is quite straightforward: they produce toxins that our immune system would ordinarily identify, target, and neutralize. Yet these particular toxins, called superantigens, evoke our immune system to vastly over-react, resulting in severe, and often lethal, inflammation known as a cytokine storm. The potential of these toxins for ruin is compounded by the fact that they can remain active for years and are heat resistant, rendering them suitable as biological weapons. Indeed, it was the Pentagon that first approached Prof. Kaempfer, asking him to develop an antidote to this feared biological threat.

While progress had been made in the late 20th century, Prof. Kaempfer was the first to fully decipher how these toxins evoke cytokine storms, which he published in 2011 – the greatest breakthrough in this field in 22 years. Based on this novel insight, he developed unique, small protein molecules capable of attenuating excessive inflammation, and not only in infected animals (his molecules combat infections by lethal mixtures of live bacteria in mice) but especially in severe sepsis patients, specifically, those suffering from necrotizing soft tissue infection, commonly called “flesh-eating bacteria.” Rather than fighting the bacteria or toxins, Prof. Kaempfer treats the body’s self-induced inflammation, in an approach known as a Host Oriented Therapeutic strategy. Because the human immune system will not change over a single lifetime, nor over the course of a few generations, pathogens cannot become resistant through mutation. This is a major advantage over antibiotics.

A New Drug is Born?

Prof. Kaempfer’s first-generation molecule successfully underwent all three phases of FDA clinical trials. This month, he will be submitting his FDA application for a new drug for treating flesh-eating bacteria, the first of its kind. His second-generation molecules are proving to be up to 300 times more potent in treating wound infections in animals. Indeed, per the Pentagon’s request, Prof. Kaempfer is now testing his molecules upon wounds infected by antibiotic-resistant bacteria.

Not only did Prof. Kaempfer succeed at deciphering a mechanism that had stumped scientists for decades, but his molecules are noteworthy for another reason: they counter the body’s excessive, harmful immune reaction while leaving the basal response intact, enabling the body to continue fighting infections on its own and developing protective immunity.

A Call from Pandemic-Stricken New York

In February, Prof. Kaempfer received a phone call from a large New York hospital, asking for his molecules in order to treat severely ill COVID-19 patients suffering from pulmonary cytokine storms, which closely resemble those resulting from superantigen toxins or bacteria. Yet he couldn’t just go to the post office and send a package of un-approved molecules.

With no end to the pandemic in sight, Prof. Kaempfer is hopeful that his FDA application will soon be successful. Although his application specifies the first molecule be used to combat necrotizing soft tissue infection, once approved it can be used in controlled trials on COVID-19 patients. This is especially pertinent, as many COVID-19 fatalities are due to cytokine storm. In addition, recovered patients often continue to suffer from varying degrees of multi-organ failure, also due to Coronavirus-induced inflammation.

Throughout the pandemic, Prof. Kaempfer’s lab has been running non-stop, including during the countrywide lockdown and holidays, testing his molecules against viral and cellular components, released once the coronavirus kills infected cells, that over-activate human immune cells and evoke a cytokine storm. His entire career has prepared him for this moment: his groundbreaking research has the potential to save millions of lives worldwide, and he cannot afford to take a single day – or minute – off.

"My lab has been very lucky – if you define luck as the result of decades of hard work. One of my passions is ’survival science’ – applying my scientific knowledge, encompassing chemistry and microbiology, to creating a better world."