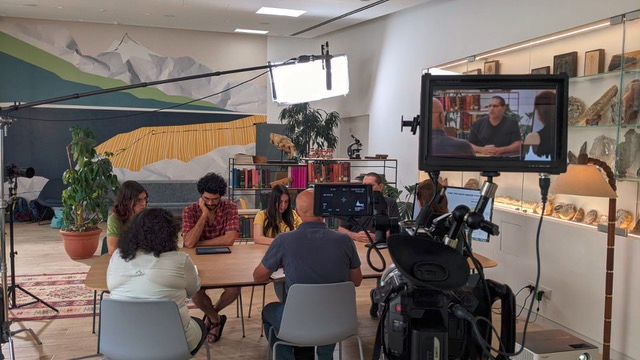 One and a Half Degrees of Education

Global warming and the resulting climatic changes have been studied and accurately predicted for many decades. Yet outside the halls of academia, not many share scientists’ sense of alarm. In fact, researchers found public discourse and school curricula replete with inaccurate, and even misleading, information, often disseminated by climate change deniers or those with ulterior motives.

Well aware that research scientists are not always the best science communicators, Dr. Goldsmith and Prof. Aharonov spent a year and a half developing their project, first establishing the Climate Forum, comprised of top Israeli climate scientists from across the country, and then working with the Forum, pedagogical advisors, focus groups, and creative director Shira Liberty. The result is One and a Half Degrees (Maala Va’Chetzi) – a series of 28 round-table presentations that cover the gamut of the field.

The presentations are grouped into four themes, starting with the scientific method, moving onto how the climate works, then looking at what the future holds, and finally asking what can be done. While there is a logical flow to the series, each roundtable presentation also stands alone. The content is at an 11th grade level, making it largely accessible to the general public. In fact, many of the people sitting around the table are Jerusalem high school students.

“There is an acute need to provide the public with high-quality, cutting-edge climate and energy science. We cannot afford to wait for the “trickle-down effect,” for academic knowledge to be translated into policy. We are facing an emergency – right here, right now. We are extremely proud that the Hebrew University is spearheading this project, the first of its kind anywhere.”

One and a Half Degrees is currently in post-production, and will be online in early spring 2022. The public will have free access to over two dozen presentations, professionally designed power points, relevant bibliographies, and Hebrew transcripts. They hope to add Arabic and English transcripts in the future.

One and a Half Degrees is supported by the Hebrew University’s Center for Sustainability and the Climate Science Center.