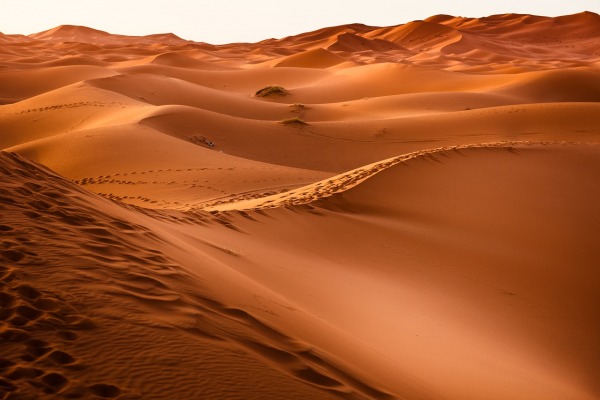 When it comes to the world’s climate, in the past decade, planet Earth keeps sending us its summer siren’s call. According to NASA, nineteen of the hottest years have occurred since 2000, with 2016 and 2020 tied for the hottest on record. This summer is already making worldwide headlines, with England scorching beyond 40 degrees Celsius.

And more climate extremes are happening. Earlier snowmelts have been affecting the high-altitude areas, severe forest fires are on the rise, while rainstorms, followed by dry periods, are becoming the norm. If heat waves and severe droughts are trends that will continue to hold across the globe, what will the future bring to temperate and tropical forest and cropland regions of the world?

Scientists are looking at the unique adaptations of desert life, which functions by its own set of rules long considered to be unique to dry areas. Now, new research by an international team of scientists led by Hebrew University of Jerusalem (HU) Professor José Grünzweig and co-authored by his HU colleagues Professors Efrat Sheffer and Ori Adam and Dr. David Helman, suggests that climate change is causing these dryland mechanisms to increasingly affect Earth’s wetter areas. Their findings were published in Nature Ecology and Evolution.

"To better predict how the world’s wetter regions will operate in a hotter and drier climate, we should begin to apply what my colleagues and I have learned from how nature functions in dry regions," shared Grünzweig.  Spurred by a recent meeting of the European Ecological Federation and an action of the European Cooperation in Science & Technology (COST), the research team compiled a list of unique rules of life driving dryland ecosystems. Currently, more than a third of the Earth’s land area is drylands. Many of these key processes had previously been considered relevant only to arid regions, including: rapid cycling between wet and dry conditions that influence plant and animal activity; redistribution of water in soils by plant roots; and formation of living crusts on soil surfaces by microscopic organisms.

Overall, the team identified a dozen different dryland mechanisms affecting vegetation distribution, plant growth, water flow, energy budget, carbon and nutrient cycling, and decomposition of dead material. These mechanisms were categorized as either more likely to be fast-responding – those that we might expect to see occurring from short-term drought, such as dry-wet cycles, heat and sunlight breaking down dead material, or slow-responding – those that would happen after years of dry conditions, such as formation of living crust on soils, as a result of changes in plant distribution.

The researchers presented 12 dryland mechanisms that are routine in drylands but not commonly found or studied in wet systems. Then they categorized these mechanisms based on how likely it is that they would occur among wetter systems in the future.  "I have been studying drylands and their unique behaviors throughout my academic life which, until now, were considered unique to regions such as ours in Israel," said Grünzweig. "Today I think it is crucial to bring these ideas to the attention of researchers and the public elsewhere, calling people to look for the unprecedented emergence of these dryland mechanisms in response to climate change in their backyard".

For example, much of Europe experienced a severe drought and heat wave in the summer of 2018. As a result, the low plant cover in agricultural fields during this time likely led to desert-like biological processes occurring in these historically wet locations (see Denmark summer 2018 image). Currently, a new heat wave has hit Europe. Under these conditions, plant growth decreases dramatically, which leads to more soil exposure on surfaces that aren’t covered by plants.

Dry soil conditions will spur many dryland mechanisms, such as redistribution of soil water via plant roots. Other mechanisms will respond to changes in vegetation, with more sparsely distributed vegetation increasing the number of organisms forming soil surface crusts, and increasing the role of sunlight in breaking down dead leaves.  "We've been studying for years how in our dry environments plants are organized in a patchy structure compared to the dense cover of vegetation typical of wet areas, but now we understand that plants anywhere will reorganize to meet new climate conditions," explained Sheffer.

To better understand the potential ramifications of dryland mechanisms on vegetation distribution and decomposition of dead material, the research team used its drylands’ data to model how the forces driving drylands will increasingly be applied to temperate regions under future climate conditions.

The results were stunning. “Our data predict that by the end of the 21st century, the total non-dryland area with average topsoil temperature of >40 degree Celsius is estimated to increase by about 17 million square kilometers, equal roughly to the combined land area of the USA and Brazil,” noted Adam.

“In this study, we present the first estimation of global soil water potential – a measure of drought relevant to most dryland mechanisms,” described Helman. “Our projections for the end of this century imply that soil drought will increase markedly in the humid regions of South America, Africa, and Oceania, with considerable regional drying also in North America and Europe.”

These results can then be incorporated into models to simulate how nature will function under drier or hotter conditions. It is usually assumed that the operating rules will stay the same even if the climate changes. However, what if the rules by which the life works change and our traditional models don’t take this into account?  Clearly some of these projected changes will occur in regions with large human populations, and, thus, will significantly affect the well-being of society in these regions. The new insights of this study can contribute to advancing society’s capacity to withstand climate extremes and lessen their impacts on nature and people.

One thing is sure, say the researchers, a better understanding of our desert systems could lead society to set more realistic expectations for climate change’s effects on historically wetter areas and a more successful attempt to heed Mother Nature’s warnings.