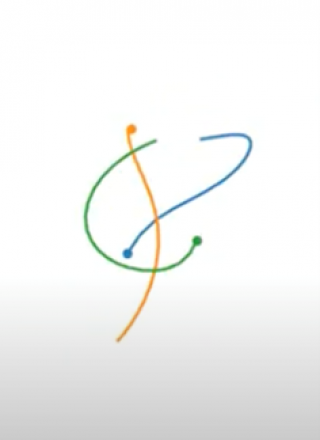 The “three-body problem,” the term coined for predicting the motion of three gravitating bodies in space, is essential for understanding a variety of astrophysical processes as well as a large class of mechanical problems, and has occupied some of the world’s best physicists, astronomers and mathematicians for over three centuries. Their attempts have led to the discovery of several important fields of science; yet its solution remained a mystery.

New research, led by Prof. Barak Kol of the Racah Institute of Physics at the Hebrew University, adds a step to this scientific journey that began with Newton, touching on the limits of scientific prediction, and the role of chaos in it.

The theoretical study presents a novel and exact reduction of the problem, enabled by a re-examination of the basic concepts that underlie previous theories. It allows for a precise prediction of the probability for each of the three bodies to escape the system.

Following Newton and two centuries of fruitful research in the field including by Euler, Lagrange and Jacobi, by the late 19th century the mathematician Poincare discovered that the problem exhibits extreme sensitivity to the bodies’ initial positions and velocities. This sensitivity, which later became known as chaos, has far-reaching implications - it indicates that there is no deterministic solution in closed-form to the three-body problem.

In the 20th century, the development of computers made it possible to re-examine the problem with the help of computerized simulations of the bodies’ motion. The simulations showed that under some general assumptions, a three-body system experiences periods of chaotic, or random, motion alternating with periods of regular motion, until finally the system disintegrates into a pair of bodies orbiting their common center of mass and a third one moving away, or escaping, from them.

The chaotic nature implies that not only is a closed-form solution impossible, but also computer simulations cannot provide specific and reliable long-term predictions. However, the availability of large sets of simulations led in 1976 to the idea of seeking a statistical prediction of the system, and in particular, predicting the escape probability of each of the three bodies. In this sense, the original goal, to find a deterministic solution, was found to be wrong, and it was recognized that the right goal is to find a statistical solution.

Determining the statistical solution has proven to be no easy task due to three features of this problem: the system presents chaotic motion that alternates with regular motion; it is unbounded and susceptible to disintegration. A year ago, Dr. Nicholas Stone of the Racah Institute of Physics at the Hebrew University and his colleagues used a new method of calculation, and for the first time achieved a closed mathematical expression for the statistical solution. However, this method, like all its predecessor statistical approaches, rests on certain assumptions. Inspired by these results, Kol initiated a re-examination of these assumptions.

In order to understand the novelty of the new approach, it is necessary to discuss the notion of “phase space” that underlies all statistical theories in physics. A phase space is nothing but the space of all positions and velocities of the particles that compose a system. For instance, the phase space of a single particle allowed to move on a meter-long track with a velocity of at most two meters per second, is a rectangle, whose width is 1 meter, and whose length is four meters per second (since the velocity can be directed either to the left or to the right).

The three-body problem is unbounded and the gravitational force is unlimited in range. This suggests infinite phase space volumes, which would imply infinite probabilities. In order to overcome this and related issues, all previous approaches postulated a “strong interaction region” and ignored phase volumes outside of it, such that phase volumes become finite. However, since the gravitational force decreases with distance, but never disappears, this is not an accurate theory, and it introduces a certain arbitrariness into the model.

The new study, recently published in the scientific journal Celestial Mechanics and Dynamical Astronomy, focuses on the outgoing flux of phase-volume, rather than the phase-volume itself. For instance, consider a volume of gas within a container, a marked gas molecule moving within it, and consider the container wall to have two small holes. In this case, the probability for the molecule’s eventual exit hole would be proportional to the flux of the surrounding gas through each hole.

Since the flux is finite even when the volume is infinite, this flux-based approach avoids the artificial problem of infinite probabilities, without ever introducing the artificial strong interaction region.

In order to treat the mix between chaotic and regular motion, the flux-based theory further introduces an unknown quantity, the emissivity. In this way, the statistical prediction exactly factorizes into a closed-form expression, and the emissivity, which is presumably simpler and is left for future study.

The flux-based theory predicts the escape probabilities of each body, under the assumption that the emissivity can be averaged out and ignored. The predictions are different from all previous frameworks, and Prof. Kol emphasizes that "tests by millions of computer simulations shows strong agreement between theory and simulation." The simulations were carried out in collaboration with Viraj Manwadkar from the University of Chicago, Alessandro Trani from the Okinawa Institute in Japan, and Nathan Leigh from University of Concepcion in Chile. This agreement proves that understanding the system requires a paradigm shift and that the new conceptual basis describes the system well.

It turns out, then, that even for the foundations of such an old problem, innovation is possible.

The implications of this study are wide-ranging and is expected to influence both the solution of a variety of astrophysical problems and the understanding of an entire class of problems in mechanics. In astrophysics, it may have application to the mechanism that creates pairs of compact bodies that are the source of gravitational waves, as well as to deepen the understanding of the dynamics within star clusters. In mechanics, the three-body problem is a prototype for a variety of chaotic problems, so progress in it is likely to reflect on additional problems in this important class.