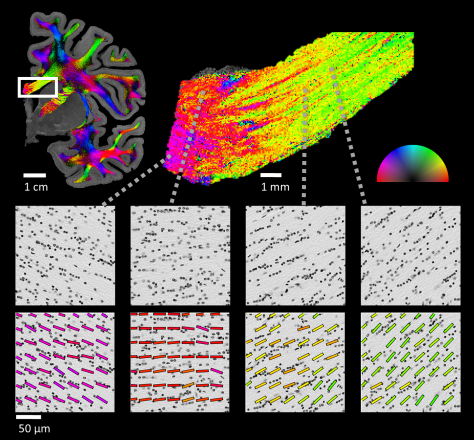 The human brain is a constant buzz of activity, with its 86 billion nerve cells (neurons) sending electrical signals from one region of the brain to another. The signals travel along the white matter fibers, a maze of wire-like fibers, ultimately giving rise to all brain functions. Uncovering these wire-like highways between neurons has been a longstanding challenge for neuroscience.  Existing methods for mapping this neural circuitry at the cellular level are either limited to animal studies or require highly specialized equipment for data acquisition and processing.

Recently, a novel approach for mapping and visualizing these nerve fibers was developed by Professor Aviv Mezer and Dr. Roey Schurr, neuroscientists at the Hebrew University of Jerusalem (HUJI)’s Edmond and Lily Safra Center for Brain Sciences (ELSC). They utilized a technique that has been around for almost 140 years, but was never used to study the fiber architecture of the brain’s white matter.  Their findings were published today in the prestigious journal Science.

Neurons themselves have long been studied using the purplish Nissl stain– a stain invented by German medical student Franz Nissl in the 1880s.  Its use in staining neurons has revolutionized our understanding of the cortex - the outer gray layer of the brain. However, the Hebrew University team are the first to use Nissl stained brain slices to reveal fiber pathways in white matter.

The white matter is mainly made up of nerve fibers and a group of cells known as glia.  These glial cells, until very recently, were largely ignored and thought to be rather unimportant space fillers in the brain – in fact their name "glia" comes from the ancient Greek, meaning "glue".  When Schurr joined Mezer's lab as a doctoral student, he decided to look at some pictures of Nissl stained brain tissue.  "It was just curiosity," recalled Schurr, "textbooks are full of illustrations, but I wanted to understand what the white matter of the brain actually looked like."  To Schurr's surprise, he noticed that the glial cells formed a pattern of short rows.  Moreover, the glial rows seemed to align with the local nerve fibers.  “We did a thorough literature review and found a 1992 paper that already described this glial cell organization,” shared Schurr, “but this finding did not receive the attention it deserved in our field.”

Other research took over, but recently Schurr returned to the unusual observation he had made.  The researchers realized that by using simple computational tools from the field of image processing, they could capitalize on the patterned cell organization to uncover the white-matter architecture.  "I was amazed when we first applied this technique to a Nissl-stained slice of the brain,” Prof. Mezer said.  “In Nissl-stained images, the white matter has a faint homogeneous appearance. Applying some computational tools suddenly brought out a colorful map depicting the fine architecture of white-matter fibers, which was hidden there all along. We immediately recognized it as an important piece of the puzzle that scientists have been searching for in the study of white matter.”

This technique, termed by the Hebrew University researchers as the Nissl-ST (“Nissl-based Structure Tensor”), can be applied to the white matter in any brain slices that have undergone Nissl staining.  Since Nissl staining is the most common stain used in brain science, there is much of it to be found all around the world, including digitized datasets and open-source atlases of high-resolution stained brain slices.

"The application of Nissl-ST," Mezer concluded, "has great potential for future studies of white matter in normal brain development, aging and pathological states that affect white matter, such as neurodegeneration and schizophrenia.”