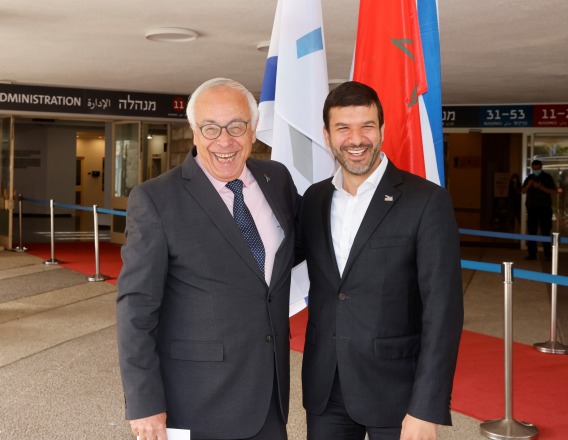 Israel’s academic cooperation with Morocco hit a high point this week with the visit of a senior delegation from Morocco’s Mohammed VI Polytechnic University (UM6P) to the Hebrew University of Jerusalem (HUJI).

Seeking to establish a medical school and school of pharmacy, the UM6P representatives met with Professor Dina Ben Yehuda, Dean of the Hebrew University-Hadassah Medical School, to learn how HUJI prepares its future doctors for a medical career based on computational medicine and AI, while maintaining humanity and compassion for their patients.

The visit is based on an agreement signed between the two universities last summer to “collaborate on areas of mutual interest, namely agriculture, business, pharmacology, natural sciences, mathematics and computer engineering.”

Dr. Hicham El Habti, UM6P President shared, “these discussions between UM6P and HUJI are part of a new dynamic in the relationships between the Kingdom of Morocco and Israel.  After setting up the framework of collaboration, we are now launching a new milestone to bring together researchers and scientists from both sides to discuss concrete projects in agriculture, sustainability, health and high-tech.”

On the occasion of the visit of the UM6P delegation, HUJI President Professor Asher Cohen declared, “Hebrew University takes pride in being one of the first Israeli universities to formalize a relationship with our esteemed Moroccan counterpart.  We look forward to the many ways this collaboration will benefit our two countries and the region, at large.”